The landmark Atlanta Restaurant, The Varsity, will be celebrating its 90th anniversary this summer.  Five of their locations, excluding the airport, will participate with specials and commemorative merchandise leading up to the big day. 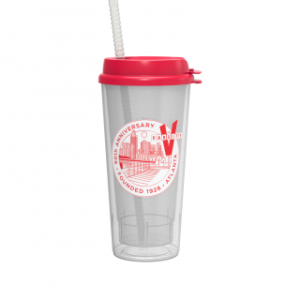 You will be able to purchase a refillable cup in Athens, Dawsonville, Kennesaw, Midtown, and Norcross for  unlimited refills on soft drinks and $0.90 refills on frosted orange, vanilla, and chocolate milkshakes through December 31, 2018. The cups are available June 1st for $5.99.

The original Varsity was opened in 1928 on a 70′ X 120′ lot with a white picket fence by a man named Frank Gordy; a man with a $2000 nest egg and “million dollar taste buds.” Through his dedication to freshness, superior quality, advanced technology and serving the best food fast, he gained a reputation that is known worldwide with the saying “What’ll ya have?

Purchasing the limited edition cup sales will go directly to Shepherd’s Men, a group that raises money for the Share Military Initiative at Shepherd Center in Atlanta. The Varsity has pledged $90,000 to their charity.

The Varsity will conclude its festivities with a 90th-anniversary party on Saturday, August 18, where all menu items will be priced at $0.90 all day. You can also purchase red or blue anniversary t-shirts to celebrate the event.