Update: The renovated BIG Chicken is opening Thursday, May 11th, with a ribbon cutting at 10am. The last remodel was in 1993. Be a part of Marietta history and stop by for their “re-hatching!”

When I first moved here almost 18 years ago, we would often get two types of directives when driving.  One 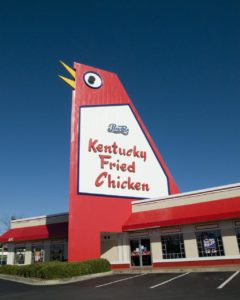 was “turn left at the cows”(parts of Cherokee were still pretty rural back then) and “it’s by the Big Chicken!” Everything it seemed somehow was correlated to its proximity to this iconic landmark.

And while I kept my eyes open for what I imagined was some sort of glorified yard ornament, when I finally drove past it, I was shocked that it really WAS a Big Chicken!

Erected in 1963 as part of Johnny Reb’s Chick, Chuck and Steak, it didn’t become part of the Kentucky Fried Chicken Family until 1974, and has since cemented its place as a Cobb county (and arguably a Georgia) landmark.

The AJC reports that the renovation will mean that the restaurant will shut down for a 12 week period. CEO Mike Kulp who owns the Big Chicken and 60 Atlanta area KFC’s, stated that it had been 20 years since the last update and felt the image was “a little tired”.

The improvements will include weathered wood, brick and steel beams, new tile and a new patio and screened in porch, adding about 55 seats to the existing layout. Along with a traditional wall of historical KFC pictures as seen in many KFC’s, there will be a photo wall displaying images of the Big Chicken through the years.

Watch for the new Big Chicken signage with the renovation, emphasizing the brand at this KFC location. The new and improved KFC will reopen the second week of April with a grand opening event. Stay tuned for our Facebook page for details.