Here at ScoopOTP, we take a slightly different approach than the dinosaur media to reviewing restaurants. The lamestream print media will generally send a critic to a restaurant and review it good, bad, or ugly. Here, the eating firm of Me, Myself, and I, often following up on tips from the credible underground grubber syndicate, report back on only the crème de la crème.

Hence, a cynic may question why the preponderance of positive reviews. If a restaurant does not rise to elite level, your loyal restaurant correspondent will not waste his thesaurus and bandwidth telling you about it. We now return you to only the best that uOTPia has to offer. It’s another can’t-go-wrong-with-anything-on-the-menu eatery: Mitch’s Meats & Fish.

Important detail: Mitch’s Meats & Fish is not a sit-down restaurant. It is a high-end butcher and fishmonger both selling superior quality raw meats and fish plus my favorite part — a spectacular sandwich and soup takeout lunch selection and pre-cooked offerings for grubbers on the go. 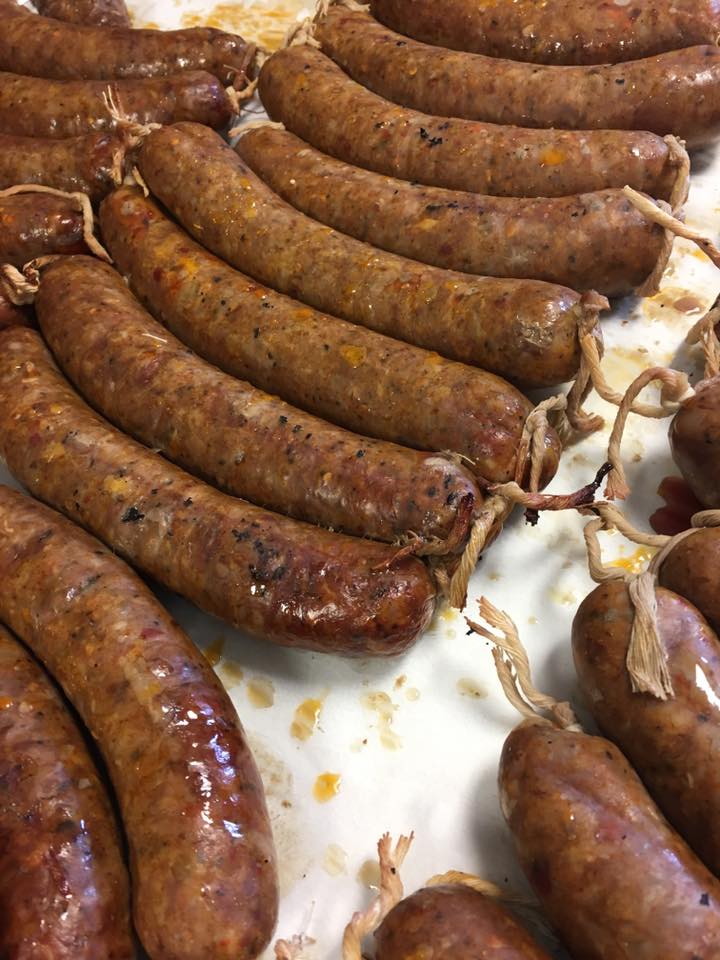 Mitch’s house-made sausage (chorizo my favorite) is a must for home chefs, but as someone more talented in eating than cooking, my personal favorites are when Mitch and his staff do all the work and I do what I best: eat. And eat. Then eat some more.

Tuesdays through Friday, from 11 AM-2 PM, Mitch’s has a sandwich and salad menu, a bit short on selections but made up for many times over with quality. Now the tough part. I’m supposed to single out favorites.

Okay, perhaps my favorite is the fish sandwich served on white bread with spicy tartar sauce. What kind of fish you ask? Any that is in the display window — the same options the cook-at-home chef can choose from. Thus far I’ve had sushi grade tuna, red snapper, grouper, and halibut. Let’s just say, don’t look for any tilapia among the selections, if you know what I’m saying. Here is what I have had and will happily eat again: all of them.

No wait, what I meant to say is my fave is the corned beef sandwich on Mitch’s own rye bread. It is piled Yankee-high, topped with his homemade creamy and sweet onion dressing. It was a mild surprise to find out the corned beef and pastrami are not made in-house. Mitch is a bit coy other than to express it is a gourmet source. My taste buds verify. Rest assured, it is better than even the best store-brands such as Thumann’s, Dietz & Watson, or Boar’s Head. And I mean considerably better.

Be aware both the corned beef and pastrami are much leaner than most. That is not necessarily a good thing as red meat is like a food critic: without some fat, how much taste can they possibly have? Fear not, it is not an issue as Mitch’s mystery outsource may be a bit unalike what New York expatriates may expect, but indisputably among the best selections in this part of the country.

Let’s talk about my wife. She demands only the best (obviously as she married me) but sticks to comfort food. There are few items she loves more than Caesar salad, both as pre-meal salad or as a main entree with chicken. She’s had more adaptations than 92.98 percent of the population at highly touted restaurants in sundry states. Her favorite of all-time can be found at Mitch’s Meats. Why? Mitch makes his own dressing and nobody does it better quite the way Mitch can. It’s topped by yardbird from the most distinguished supplier of them all: Springer Mountain chicken. Smoked, with or without Mitch’s spices and grilled are your pickings to top off the best salad of its ilk you have ever had.

Soups. I’ve probably sampled, okay inhaled close to 20 in their rotation. So now I’m supposed to distinguish a favorite? Oh boy, the hearty seafood chowder is an almost daily option, replete with fish from Mitch’s case, in a thick, creamy soup.

I would love to see — I mean eat — a lot more of the beef barbecue soup. This splendid concoction is about 70 percent Texas chili, 22 percent Brunswick stew and eight percent other. Mitch also showcases his sausage in a magnificent sausage, tomato, and parmesan chili-esque potion. Now that’s my favorite — if it were not for the other soups I just mentioned.

The most compelling testimonial about their soup may come from another member of the family, my first-born son. When I go to Mitch’s, I can’t control myself and always come home with even more food than I can consume in just one sitting. Though my adoration of soups somehow skipped a generation, oldest spawn is quite enthusiastic in his assisting me in intake of the surplus. I told him that I was happy to see Mitch converted him into a soup lover. His response, “No, I still don’t like soups. I just love Mitch’s soups.” The sausage, chili, and barbecue seem to be his favorites so far.

Though the soup bar itself is only open during lunch hours, soup is still available all day. Many patrons pick up containers to go for the trip home. Mitch even throws in a vegetarian option occasionally. Just to prove I can eat a soup without meat or seafood, I’ve tried some, with cream of cauliflower my favorite.

It is by far the best option in quality and quantity (just work your way through the roster) for soups in these parts. Oh I can name a select few options for soups competitive in quality, but none that have well over a dozen that have me screaming for more.

Mitch has a couple of signs posted pleading for patience among the hungry clientele. It is great to see word has gotten out about this small mom and pop gem. But just like Mitch’s isn’t for the cheap eats pursuer or a sit-down meal, it may not always be for the impatient. Great things come to those who wait.

Whether one loves to cook and eat or just eat, Mitch’s is the place. As aforesaid, we prefer to focus on eateries that excel from top to bottom of the menu. This is one of those places.

Author Joe Duffy is great at eating and pretty good at video editing too. Get videos perfect for memorials at funerals, celebrations, bar Mitzvahs, and any occasion at DuffyVideo.com. Follow all his restaurant ramblings on Twitter @CalVulcan.