The match will mark the return of former Atlanta United Head Coach Gerardo “Tata” Martino, who this week was named

Mexico’s new manager. The Atlanta match will serve as preparation for this summer’s CONCACAF Gold Cup and Mexico is expected to travel to Atlanta with their full tournament roster.

The opponent, kickoff time, as well as additional matches for the 2019 Mexican National Team U.S. Tour, will be announced at a later date. 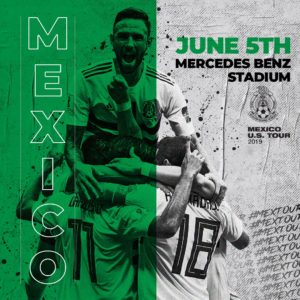 For more information, fans are invited to visit www.MexTour.org, the ultimate fan destination page with the latest information related to the team’s visit to U.S. cities throughout the year, including full tour schedule, on-sale dates, gameday guide and activities, public events and more.

While this will be Mexico’s first game at Mercedes-Benz Stadium, the squad is no stranger to the Atlanta market, having played several times in the city since its first visit in 2009 as part of the U.S. Tour.  The team last visited the ATL in 2016, defeating Paraguay 1-0 in a game witnessed by 63,049 fans at the Georgia Dome.

Entering its 17th edition, the annual Mexican National Team U.S. Tour matches have become one of the most popular events in the sport, with an average of approximately 63,000 fans per game during the 2018 edition. With nearly 85 games played since 2002, the Mexican National Team has been able to use the matches not only to prepare for important competitions like the FIFA World Cup and CONCACAF Gold Cup, but also to reach their fervent fan base across North America. 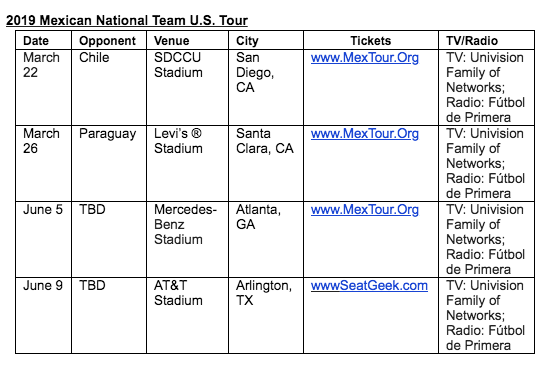