You might remember a popular Roswell restaurant called Indigo that was around from 2008-2011, but closed due to a catastrophic fire. Restaurateur and Chef Todd Hogan has re-branded his restaurant and has now been open for a few months in Milton.  Hogan re-conceptualized and remodeled the former Sip Kitchen and Wine Bar.

This restaurant is an upscale and swanky modern-American dining experience. In an conversation with Chef Hogan, he said, 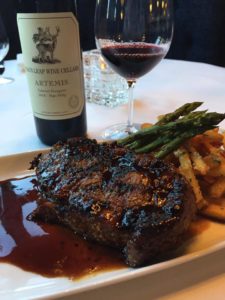 You can relax and enjoy dinner along with live jazz music every Friday and Saturday nights. Weekly features like Wined-UP Tuesdays with half price wines by the glass, $5 Martini-Manhattan Jazz Wednesdays featuring Mike Kelly Jazz Guitarist, and Sunday’s Wine and Cheese Social for half price wines by the bottle. Starting on January 12th, Thursday will be Mixen and Vixen Ladies night.

Hogan said top menu choices include their version of Oysters Rockefeller as an appetizer, lobster and scallop St Jacques and their certified angus hormone- and antibiotic-free ribeye steak for the main meal. For dessert, an Indigo Joy, which is their take on Almond Joy.

For Scoop OTP readers, Chef Todd is offering a complementary appetizer for two through the month of February on Thursday night only, so tell your waitstaff that we sent you!

You can spot Chef Hogan on different days and nights at each of these restaurants as he works alongside his team and chefs de cuisine. It’s important for him to stay in touch with his customers and hear their feedback.