Madri Gras is in full swing! If you can’t trek to the French Quarter, allow the Crescent City to make it to you. Here are the best options in uOTPia to get your Big Easy fix. And stop calling it Fat Tuesday. I’m sensitive about my weight.

Henry’s Louisiana Grill — Pro tip: if you plan on eating here on a weekend, make a reservation several days in advance. Henry’s has been getting critical acclaim and packing the house since the early part of this century.

Gumbeaux’s Cajun Cafe — It would be accurate to say your loyal correspondent has a bias, or more accurately, practical limitations to tout disproportionately great restaurants close to my Alpharetta/Roswell home chomping grounds. So wow, west of 285 checking in, much less a place west of Six Flags. But I met an ITP food snob here and it lived up to the hype. And never say I ignore west OTP ever again.

Eagle’s Landing Cafe and Grill — Again, I turn to my trusted OTP northeast man Jacob Greenblat. My inquisition had him craving their gumbo.

Adele’s — This place is so good, some famous singer named herself after it. Okay, that statement has not been fact-checked,

but it would make perfect sense because everything I’ve had here is outstanding. Their beignets are in the same league with what I’ve had in Nawlins. In fact, the Food Network agrees with me.

Hugo’s Oyster Bar — Hugo’s does not describe themselves as Cajun. But a menu replete with gumbo, poboys, and seafood jambalaya, the Cajun accent is unmistakable.

C&S Chowder House — Huh, didn’t I just list this as a New England gem? Do I need a map? Strangely the sister restaurant of Hugo’s is where to go for jaw-dropping beignets. It is both accurate to say Adele’s deserves their national press for their beignets. Thanks to C&S it is equally accurate to say Adele’s may make the second-best beignet in Roswell. I will happily call it a tie—pending much more research.

Dutch Monkey Doughnuts — Oh gosh this place does doughnuts as well as anyone. And they make a king cake.

Douceur De France — And yet another of your cyber critic’s favorite bakeries, also puts out a great king cake. They manufacture the third best beignets in the area. If you have to ask who is ahead of them, you ignored everything I wrote up to this point.

Favors and Flavors — No frills, cheap eats. You must, absolutely must get the “Bunch Drive Boil.” 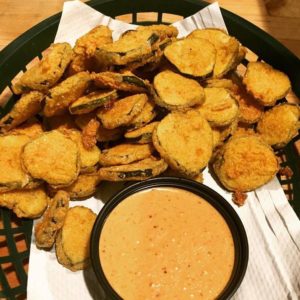 Fickle Pickle — The best-fried pickles anywhere, they also have Cajun tilapia. Want some Cajun fusion? Try their CreoleCuban. They do a very good shrimp poboy special occasionally. The hitch is it’s very similar to their shrimp burger, the best thing on the menu. So, we may not see the shrimp poboy as a permanent fixture. But in this case, being wrong is a good thing.

This research is brought to you by a generous grant from DuffyGifts.com the place to go for gifts for all occasions from MyThirtyOne Gifts.