Georgia’s country music superstar, Zac Brown, is getting into the whiskey business. Z. Brown Distillery is tucked into the foothills of the Appalachian Mountains and founded upon a deep-rooted respect for the long-standing, pre-prohibition traditions of making spirits in North Georgia and Appalachia. Z. Brown Distillery combines history, tradition and culture to create a truly American-made whiskey. For Grammy award-winning musician Zac Brown, of Zac Brown Band, the distillery is a return to his hometown. 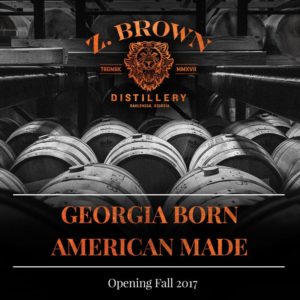 Stillhouse Creek Craft Distillery, a boutique distillery in Dahlonega, will be rebranded as Z. Brown Distillery. Dahlonega is named one of the 15 best small towns to visit in Georgia, so now you can visit and enjoy some small-batch, hand-crafted Appalachian-style spirits, including whiskey and brandy.

According to Eater Atlanta, the distillery is the latest venture for Brown’s Southern Ground lifestyle company, which previously operated the Southern Ground Social Club restaurant for four years in Senoia. The company also has a full-service southern fare restaurant in the works for Philips Arena.

As for Z. Brown Distillery, master distiller Jeff Odem plans to use local crops from nearby farms, such as lavender and heirloom corn, to make the spirits.

Once the distillery is up and running, tastings and tours will be available for the visiting public at 2148 Town Creek Church Road, Dahlonega, GA 30533. You can follow the business on Facebook for the latest updates.