With nothing to do and nowhere to go, many turned to their favorite streaming services like Netflix and Hulu to pass the time — about eight hours a day on average, to be exact.

Enter, Tiger King: Murder, Mayhem and Madness, the bizarre docuseries following Joe Exotic and his career-long feud with fellow big cat handler, Carol Baskin. The eight-episode limited series made its Netflix debut a week after the NBA shutdown and just in time to captivate the nation.

Season three of the popular Netflix original, Ozark, premiered shortly after (March 27) teaming with Tiger King to dominate U.S. viewership during the early weeks of quarantine. According to Nielsen’s subscription video on-demand (SVOD) Content Ratings, Tiger King averaged a daily minute audience of over 1 million by day three and 4 million by day nine on the platform.

Backed by successful first and second season runs, season three of Ozark drew an average minute audience of 8.7 million viewers during its first 10 days. This is double the viewership of season two’s first 10-day stint, no doubt thanks to stay-at-home orders.

Aside from Tiger King and Ozark, the pandemic has given streaming viewership a huge lift overall, but what else are people watching to fill their free time? We break it down by state and discuss why these titles have been so successful during this time.

I love their interactive map and you will need to visit their site to use it, hover over each state to see what they watched. 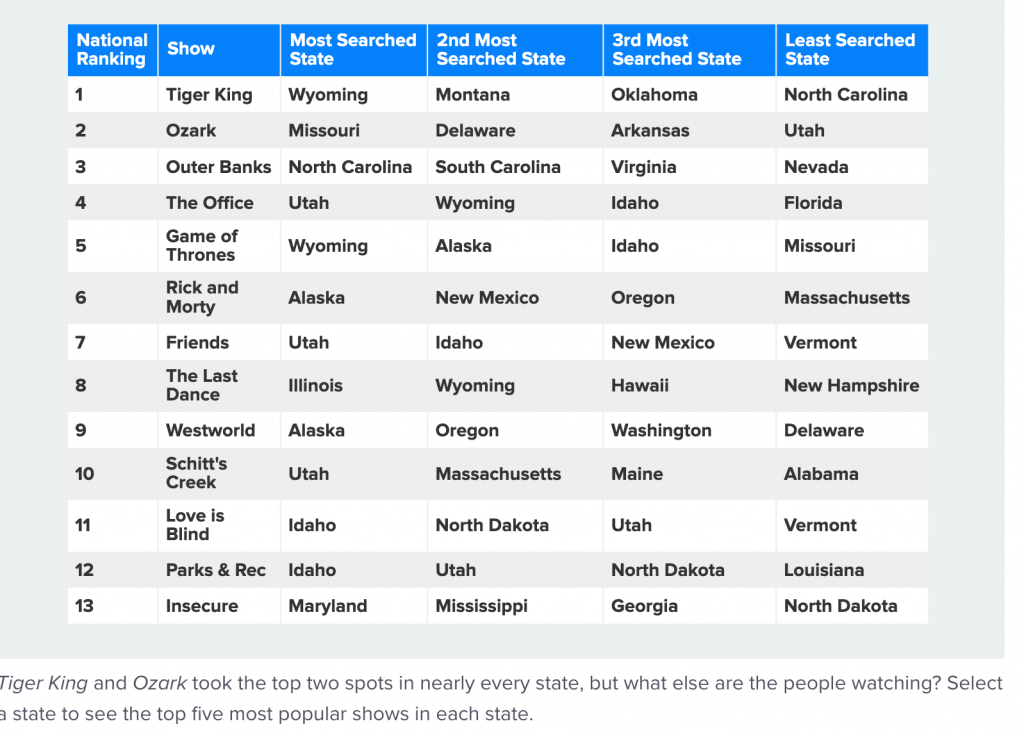 I am guilty of watching the The Office, started Tiger King (but only watched a few episodes) and I need to check out Otter Banks! Of course we know Georgia residents watched Ozark — cause we know the secret that a majority of it was filmed in our state! Wonder who broke that story?!?

If you are still obsessed with Ozark, get your Blue Cat Lodge shirt here.

For the rest of the allconnect article, you can finish reading it here.