Last winter, the movie Noelle starring Anna Kendrick, Bill Hader and Shirley MacLaine filmed scenes at The Outlets Shoppes at Atlanta and around Atlanta. We featured the casting calls.

Disney’s Noelle is an upcoming American fantasy adventure Christmas comedy film directed and written by Marc Lawrence. As Santa prepares to retire and pass on the reigns to his son Nick Claus, the stress of his future role begins to get to Nick. When his sister Noelle suggests that he take a weekend off, Nick abandons his job completely, forcing Noelle to follow him to try and convince him to return to work, leaving her facing the world outside the North Pole for the first time while their ill-prepared cousin steps up and prepares to turn Santa’s workshop into an online delivery service.

Enjoy the trailer featuring OTP and Atlanta! The movie will be streaming November 12th. 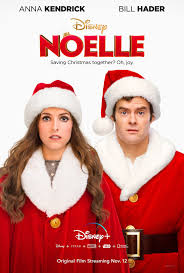 Thank you to Scoop Fan, Scott Bagwell, for the tip that the trailer was released. Have Scoop? Share it with us at info@scoopotp.com.