Ticket to the Moon: The Electric Light Orchestra Experience 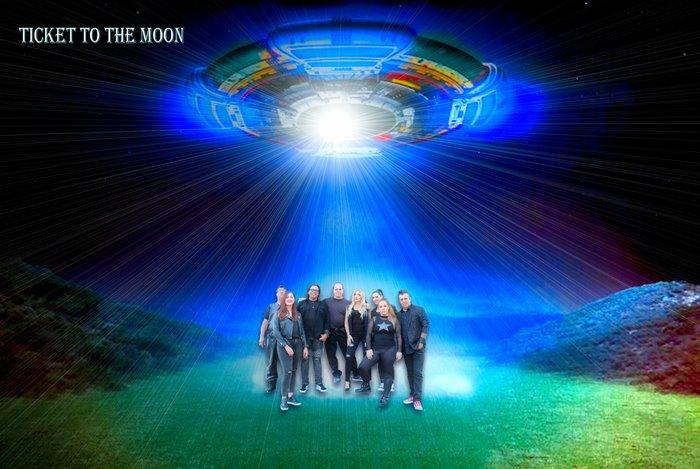 Ticket to the Moon: The Electric Light Orchestra Experience — LIVE at MadLife Stage & Studios on Friday, November 5th at 9:55!
Ticket to the Moon: ELO Tribute
WEBSITE | FACEBOOK | INSTAGRAM
A TRIP THROUGH THE MUSIC OF ELECTRIC LIGHT ORCHESTRA.

REGGIE FECTEAU
LEAD VOCALS, GUITAR
From Canada Reggie is an acomplished musician playing over 7 different instruments, producer and promoter. he has been featured on many gold records and performed in Canada with french artists like Joey Tardif, Joel Denis, Pierre Lalonde, Michel Louvain, Michel Stax, Patrick Bourgeois and Many More, Reggie also performed with Yesterday The Beatles a mega production show in Montreal, he has toured the world and has been a regular Headliner on RCCL cruises and is now Manager and owner of Ticket To the Moon

DANY ROY
GUITARS, VOCALS
Originally from Canada, Dany Roy was raised in and around music all of his life. Most of Dany’s family members were musicians and Dany started playing out regularly at the ripe old age of 17! He soon began gigging 2-3 times a week, playing local bars, weddings, corporate events, and music festivals. Dany’s musical influences range from all the classic names of the ’60s to idols of today. However, being a kid growing up in the ’70s and ’80s, classic rock bands were his favorite! Dany has been a part of the music scene now for over 35 years and you can tell music is more than just a passion for him…it’s his life and it’s in his blood! Founder of the famous Sippin’Fire Band Doesn’t miss the passion and energy that Dany brings to Ticket To The Moon…..

PAUL BOYLSON
BASS, VOCALS
A veteran of the South FL music scene, Paul has laid down the proverbial floorboards for several of the area’s top genre/tribute bands for nearly 25 years running. He is also a highly lauded and in-demand bassist for several houses of worship in and around Palm Beach County.
Broward country born and bred, Paul currently resides in the North Palm Beach area with Wanda, his lovely fiancé, and Mindy, their adorable King Charles Spaniel.
His current axe du jour is a Rickenbacker 4001S Special V63 satin finish Mapleglo, #29 of only 50 models ever produced by Rickenbacker.

STEPHANIE JAIMES
CELLO, VOCALS
Stephanie is a multi-genre cellist originally from Miami, FL who has performed alongside big-name artists, in orchestras, and chamber ensembles across the US. Stephanie is the founder of her original piano-cello duo, an El Sistema Teaching Artist, and continues to blur the line between classical and contemporary music.
Stephanie has performed in stadiums, private shows, and on TV with top artists including Jennifer Lopez, Foreigner, Trans-Siberian Orchestra, Wyclef, Raul Di Blasio, il Volo, Romeo Santos, and Christian Castro.

JADE TASSE
VOCALS, PERCUSSIONS
Opera-trained vocalist at the age of 8 and Broadway at the age of 12 by renowned voice Coach Arron Hagen, Jade has been part of many Broadway plays flying back and forth to N.Y, at the age of 16 she had a number one hit single in Japan for 6 months straight, she also exceeds as a Make up artist and business management

SIOBHÁN CRONIN
VIOLIN
Classically trained violinist performs regularly with internationally recognized artists and touring shows, including the Trans Siberian Orchestra, Michael Bublé, Josh Groban, Andrea Bocelli, Earth Wind & Fire, Ricky Martin, Disturbed, Katharine McPhee, Sarah McLachlan, Rod Stewart, and Il Volo. She recently performed with Tony Award-winning singer and actress, Audra McDonald, as well as Grammy award-winning American classical pianist, Emanuel Ax. In 2016, she performed in concert with Placido Domingo, as well as renowned Wagnerian soprano Christine Goerke. In January of 2017, Siobhan was invited to join the Cinematic Rock/Metal band, Starset, as their touring violinist. Since January she has done two extensive North American tours and will be joining them again in the fall for another North American tour alongside American hard rock band, Halestorm.
As an orchestral musician, Siobhan has performed as both a violinist and violist with a number of symphonies. She served as Principal Violist of the Detroit Symphony Civic Orchestra

WILLIAM CAREY LOCKE
CELLO
William got his Bachelor of Music from the University of Delaware in 2016 where he studied cello with Lawrence Stomberg. While at school, he was an intern at the Master Players Concert Series. William worked closely with virtuoso violinist Xiang Gao, the artistic director, and guest artists such as the Juilliard String Quartet and Canadian Brass to provide inspiring concerts to students on and off campus. He was a finalist in the school concerto competition and toured abroad with the UD Symphony Orchestra to Colombia and China. At Delaware, William studied abroad in Trinidad and Tobago for a month, learning how to play steel pan. He was also on the University of Delaware Men’s Crew team.
William Carey Locke received his Master of Music from the Frost School of Music at the University of Miami in 2018 studying cello performance with Ross Harbaugh. Currently, William is completing the first year of his DMA at Frost. William has played for the Henry Mancini Institute Orchestra for the past three years. His favorite memory was when HMI went on tour to Los Angeles and performed at the Wallis Annenburg Theater with superstars like John Williams, Quincy Jones, Kristen Chenoweth and Abraham Laboriel. William participates in new music, rock, jazz, and electronic music ensembles at UM. In previous summers, Mr. Locke has attended the Roundtop, Master Players, Green Mountain, Sewanee, and Apple Hill Chamber Music Festivals.

ARIELE GRACE MACADANGDANG
VIOLIN
is a violinist, teacher and songwriter based in Miami, FL. Prior to her graduate work at the University of Miami, she studied Violin Performance with Renata Knific at Western Michigan University. In 2012 she was selected as a featured soloist in the Walmart Annual Shareholders meeting in Fayetteville, Arkansas. During her studies at UM, she was a violin teaching assistant to Scott Flavin and a Henry Mancini Institute Fellow. She has performed in orchestra concerts for Ben Folds, Gloria Estefan, Terrence Blanchard and James Newton Howard as a member of the Henry Mancini Orchestra. Ariele enjoys collaborating with singer-songwriters and has appeared on several commercially released recordings as a solo and section violinist. She also performs regularly in Miami with her duo, American Darling Valve. Ariele is a Teaching Artist for the MIAMI MUSIC PROJECT, a private lesson instructor through the Coral Gables Community Arts Program, and assists with violin program at Saint Philips Episcopal School.

NATHALIE TASSE
KEYBOARDS, VOCALS
On Keyboards and vocal, Nathalie also as a Master trainer certification and she is very active in the sports world, she has been featured in Fitness equipment commercials, in the USA, France and Russia
VENUE INFORMATION:
All ticket holders are able to order food and drinks during the event. Standing Room Ticket holders generally place their orders with the venue bar staff. Main Floor Reserved Table and VIP Balcony Table ticket holders are served by MadLife’s friendly wait staff throughout the event.
Refer to the seating map below for a layout of the venue for this show. Please note the table arrangement is subject to change and not all tables may be available.
If You Wish To Select A Specific Reserved Table:
Holders of VIP Balcony and Main Floor Reserved Table tickets have the ability to select any available reserved table from the moment their tickets are purchased, up until 30 minutes BEFORE doors open to the event (i.e. if doors are at 6:30, cutoff time for selecting a reserved table would be at 6:00). Tables can be selected EITHER at the Box Office or by contacting the Box Office during its hours of operation at (678) 384-2363 ext. 1. Please note that tables cannot be selected online for this show and if you do not select a table, MadLife will select one for you. Selecting a table is not required, but is an option available.
For any wheelchair or ADA needs, please contact the Box Office in advance of the event at (678) 384-2363 ext. 1.
Please Note: Ticket Prices May Increase At Any Time
For any other questions regarding the event or tickets, please contact the Box Office during its hours of operation at (678) 384-2363 ext. 1.
Box Office hours of operation are Wednesday-Saturday 5:00 PM – 9:00 PM.