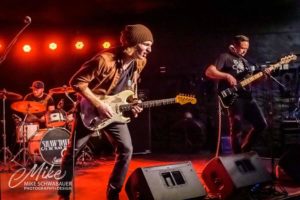 “Shaw Davis and his power trio known as the Black Ties are something of a musical anomaly. The band’s latest album Tales From The West, pours gasoline on an already large inferno. The energy level is on par with early Rush or the first incarnation of the James Gang. But still you have to turn it up a notch from there. This album is insane. He’s created a whole new genre,” writes Rock & Blues Reviews in their review, here.

“Dynamism, precision, and outright fury. It’s like a three-pronged sonic offensive – the guitar pierces, the bass rattles, and the drums batter. For fans of the heavier end of blues-rock, it’s a beating your eardrums will gladly take. This is only the beginning for this remarkable trio, ” raves Rock and Blues Muse, who also named Shaw Davis & the Black Ties one of their “50 Modern Blues Rock Soul Artists You Must Hear in 2019.”