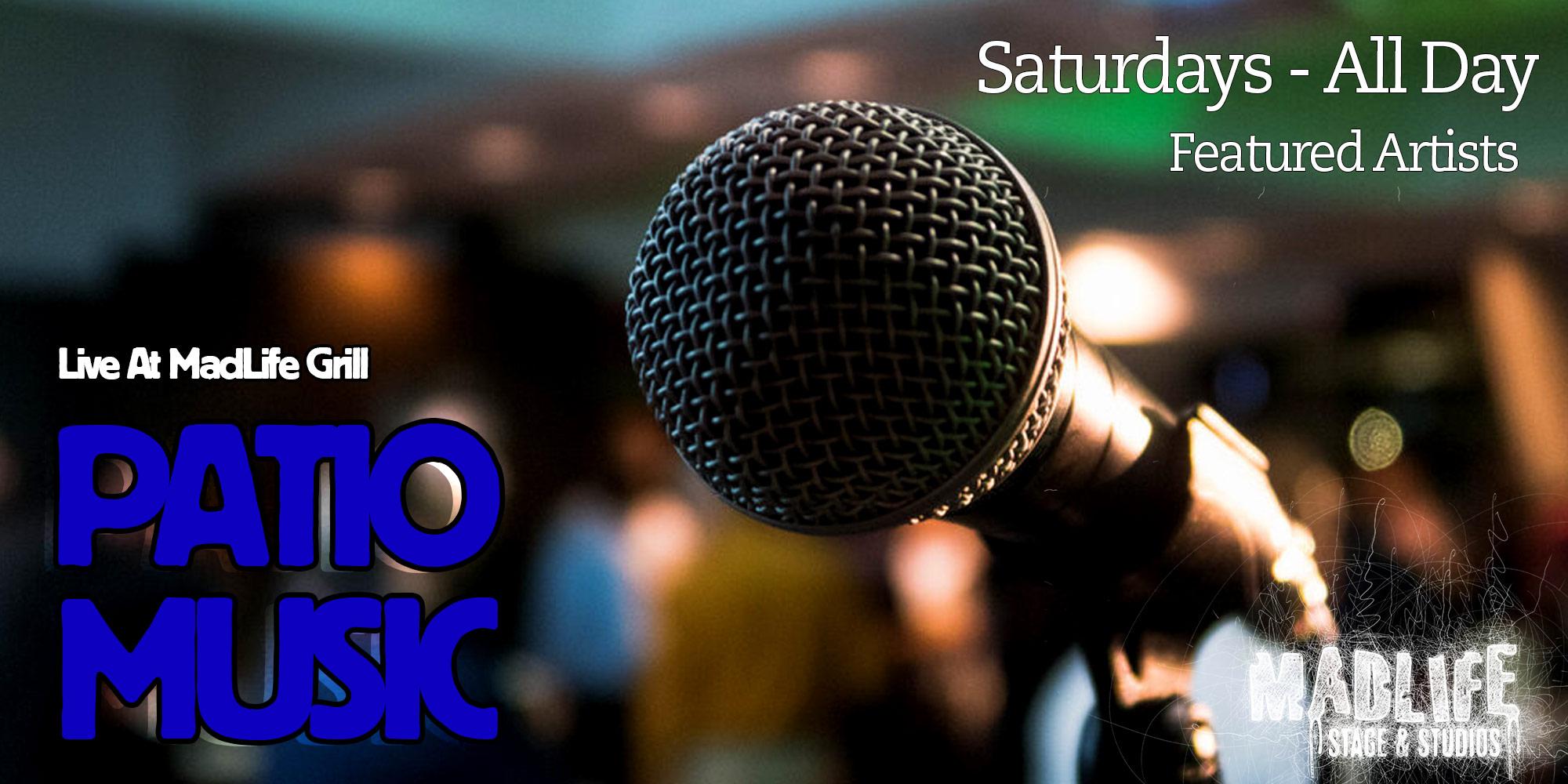 Saturday Patio Music is an event that takes place on our weather-proof & heated patio stage at The MadLife Grill, featuring local artists!
MadLife Grill Patio Stage:
Anna Shinholster 11:00-2:00
Spencer Scott Smith 2:00-5:00
Temple Monarc 5:00-8:00
Steve Baskin Band 8:00-11:00
MadLife’s Patio Has Been Transformed!
Music fans have come to love the local and regional musicians who perform on MadLife’s Patio Stage – a vibrant yet intimate (and now socially distanced) music venue in its own right. Our Patio has always been a great place to hang out and enjoy live music when the weather is perfect, but now, it is weather-proof!
That’s right! MadLife’s Patio is now both an indoor and outdoor space, having been transformed with motorized weather shades featuring GIANT windows and gentle fresh air exchange. If the weather is a bit cold or rainy, we simply drop the shades, crank up the heaters and the music lives on! Yes… it is AWESOME!
Now that our Patio can be fully enclosed, we will continue to book your favorite local and regional musicians through the winter months! Be sure to watch our calendar and future emails for MadLife’s weekly patio artist schedule.
Then order a burger, grab a drink and groove with the live music… all winter long!
See you at MadLife!
Anna Shinholster
FACEBOOK
A singer-songwriter trying to get her music out
Spencer Scott Smith
FACEBOOK
Do you like a little edge to your Country? Blues, some R&B, with a big ol heaping of Soul. Could there be anything better…along with some of the best songs you forgot you knew!
Temple Monarc
FACEBOOK
Temple Monarc is a four-piece rock band from Los Angeles, California.
Steve Baskin Band
WEBSITE | FACEBOOK | INSTAGRAM
In April 2020, Atlanta-based singer/songwriter, Steve Baskin released his fourth full-length studio recording, Mind Your Step.
Americana with Soul
The result is a soulful Americana record that references Steve’s early days of playing with Soul greats like Sam Moore, Carla Thomas and Percy Sledge. But it also features a country tone that harkens back to listening to Glenn Campbell, Johnny Cash and Charlie Pride songs on his Dad’s eight-track in the family Monte Carlo as a kid.
Recorded by GRAMMY® Award-winning producer Mark Neill in South Georgia at Mark’s Soil of the South Studio. The approach for Mind Your Step was about stripping away the technology and getting back to the basics in the studio – real musicians, real instruments and real good songs.
Early Reviews
Glide Magazine premiered the title track and said: “Shining brightly with infectious Stax-style grooves and horns, the song is a soulful anthem that feels real and direct. Baskin’s vocal balance of Americana rocker and soul singer is a perfect fit for this R&B-laced tune bursting with organ, a powerful beat and a hard-hitting chorus.” Melissa Clarke of Americana Highways advised, “Mind Your Step is a must-have for anyone who fancies swaggery music with horns.” She went on to say that with Big Wedding, Small Divorce, he “has captured a unique slice of contemporary life in a musical whirlwind of truth.”
“Steve Baskin is a smart cookie,” says Dave Franklin at Dancing About Architecture. “He knows how to take a whole bunch of musical genres, ones that already share a certain amount of musical DNA and finds the perfect way to dovetail them together so that they complement rather than clash, and the result is a great rock ’n’ soul record.”
Dan MacIntosh at Skope Magazine says that Baskin is “a smart lyricist, and there isn’t a throwaway song on this album.” And that “Baskin deserves to be better known. He’s quietly creating a strong catalogue of songs. Mind Your Step is an album that’s easy to love, from the very first listen.”
Dead Rock Star, Baskin’s third release, was called one of 2015’s early best records by Absolute Power Pop and was featured on several best of 2015 lists by power pop journalists. His second release, Naked, was nominated as best college rock albums by Just Plain Folks, a national indie music collective.
Over his musical career, Baskin has shared the stage with greats like Sam Moore (Sam & Dave), The Shirelles, Carla Thomas, Mary Wells, Percy Sledge, The Beach Boys, June Carter Cash, Don McLean, Cindy Wilson (B52s), Rob Thomas and others. And as his song states, he really did have Dinner with Lou (Reed).
Please note the artists will be performing on the patio, not the music venue.
Performance set times vary between start time and length, depending on the artist.
In order to comply with current capacity and social distancing requirements, the seating in our restaurant and patio have been lavishly spaced to accommodate roughly 40% of our usual patrons. Seating is based on a first-come, first-served basis.
Current hours of operation for our restaurant and patio are as follows:
Tuesday, Wednesday & Thursday: 5:00 PM – 9:00 PM
Friday: 5:00 PM -11:00 PM
Saturday: 11:00 AM – 11:00 PM (serving brunch until 3 PM, full menu thereafter)
Sunday: 11:00 AM – 8:00 PM (serving brunch until 3 PM, full menu thereafter)