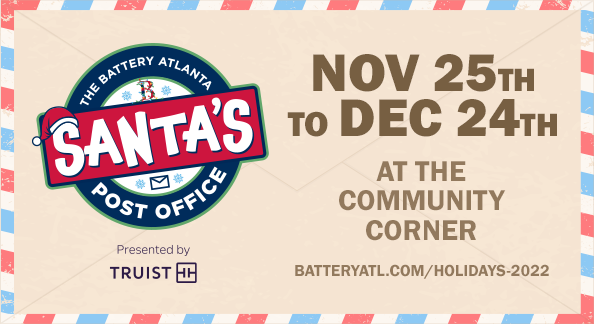 Santa Claus is once again setting up shop at his Post Office in The Battery Atlanta!  From Friday, Nov. 25 to Saturday, Dec. 24, Santa will continue the time-honored tradition of greeting local children in the Community Corner presented by Truist, located at the corner of Power Alley and Battery Avenue. Families are invited to bring their handwritten letters to Santa – postage not required – at his official Atlanta outpost. Santa’s helpers will take care of the rest! Truist will have additional activities, photo ops and giveaways for the whole family to celebrate the holidays and the local community. Instead of a professional photographer, this free opportunity allows parents and guardians to take their own photos of their children interacting with Santa as he listens to their wish lists.

**Dates are subject to change. Parking is free for the first three hours in the Red, Purple, Yellow, Silver and Green decks. For more information visit our parking information at  https://batteryatl.com/directions-parking/.

Share your experiences on social using #BatteryATL and tag @batteryatl for a chance to be featured.