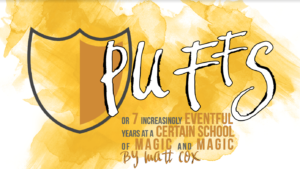 Puffs or Seven Increasingly Eventful Years at a Certain School of Magic and Magic is an Off-Broadway comedy by Matt Cox that follows a group of magic misfits during the times of a certain boy wizard. This play brands itself as funny, intelligent, heartwarming and for anyone who ever felt like they weren’t the hero in their own story. Three Puffs, who believe they aren’t Puffs, find that rely on each other to tackle school while playing the underdog in the well-known heroic tale. Along with a cast of multiple Puffs and familiar faces such as, “Blondo Malfoy”, “The Headmaster”, and “Voldy”—we invite you to discover the untold story of the “losers” who embrace being badgers and strive to be “third or nothing!”