The Mulligan Brothers are an Americana, bluegrass, folk, group from Mobile, AL.

“Armed with a violin, acoustic guitar, drums and an upright bass fashioned from two old suitcases, the Mulligan Brothers, a quartet from Mobile, Ala., stand dead center at the crossroads generally defined as Americana. Folk, country and blues all factor into the sound, as Ross Newell’s nuanced, radio-ready voice brings the band’s story-songs to vivid life.”
– Keith Spera, NOLA.com 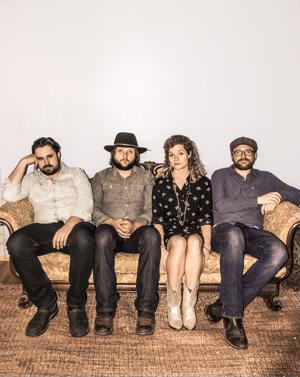 The Mulligan Brothers met playing in bars in Mobile, Alabama and their name means second chances. The last few years has seen the band crisscross the country sharing the music from their first two albums to an ever growing, dedicated fan base. Early 2016 they made their European debut with sold out shows in Ireland and The Netherlands with appearances on major television shows in both countries resulting in both albums charting in the top ten on I-Tunes Netherlands.
The lyrics in Via Portland are built on Newell’s poetic imagery and storytelling in a warm, sincere voice that is full of feeling whether it is relaxed or strained. Touring the country and playing together most nights of the week sharpened harmony, background vocals, and dynamics in the instrumentation. New songs evolved in front of audiences, giving each musician time to develop his parts and how they fit together. “This album is honest and sincere from the ground up,” lead singer Ross Newell says. “We stayed true to ourselves.